So it’s that time of the year again where Christmas has passed and the TV big wigs are looking for cheap ways to fill up the schedules while everyone is still of work. They used to rely on rerunning all the old Christmas specials or stand out programs of the year but they have become so lazy that they now show all of that on Christmas day. tbh I’m pretty sure that bits of the queens speech were reused from last year spliced with footage of the Kings speech, not that i was paying much attention. So how to fill the void, how to entertain the masses without spending a lot of money on writing or appearance fees etc. Then one stormy evening it happened, lightning hit the roof of channel 4 tower and they made the ‘review of the year show’. Its brilliant really. There is no need to write any complex and riveting story because it has all ready happened, plus everyone has seen it happen and because of this it makes for easy viewing as the viewer knows what is coming next.

Now there are several kinds of ‘End of the Year’ shows. There is you review quiz, your talking heads look back, your clip show etc. All very simple telly, But what made these reviews popular? They were about years ago but never a flagship show. When did this start? Rise Sir Charlie Brooker, King of the clip show and creator of the new breed of year review. Brooker has taken a very cheap clip based format and made it his own with his unrivaled way to getting his point across and his ‘one of the geeks’ persona which gives hopeless middle of the roaders, like me, giving us hope that one day we too can own a production company and marry a Blue Peter presenter. The BBC gave Brooker his own show with Screenwipe and then the festive special of the same format and since then hasn’t really looked back. Brookers Review of the year is the tv highlight of the festive period for me. And as the years go on and Brooker himself gets more of a life and less time to publicly moan (selfish git!) we get to see less and less of him on our screens, which with the current crop of up and comers, is a real shame.

But its not only the BBC that used this format for cheep tv, no, channel 4 were hot on their heels with their flagship new year battle cruiser ‘The Big Fat Quiz of the Year’. I am personally a fan of 8 Out of 10 Cats which is roughly the same format with Jimmy Carr presenting. Unfortunately Jimmy Carr is about as much as I can take from the “Fat Quiz”. The show itself is not that bad, the questions are fine but they seem to only be able to attract the biggest dicks in telly land. This years tosserfest includes the moronic Jonathan Ross, the ‘as funny as a spanner to the teeth’ Russel Howard and the double headed dickheads Whitehall and Cordon. Its funny that these are the four most insufferable numpties I have ever seen. Believe it or not I will not be watching it this year!

A slightly better channel 4 offering this year is ‘2012 Mashed’. This offering shows original short films outlining the events of the last year made by the best talent of the internet. Or so they say. The show unfortunately only shows clips of these short films so really doesn’t make much sense to me, why not make the show twice as long and show the whole thing? Apparently the whole of the films are on the internet but i can not find them anywhere (well bits and bobs on Youtube). Ah well. Well worth a look if you are a fan of internet films. One of the best being a feed from the Queens Facebook, a little song about Steve Jobs and a tribute to lonesome George (below).

So in review these reviews may need review in future. At least we have “Brookers 2012 Wipe” on New Years Day, BBC2 at 10. Enjoy! 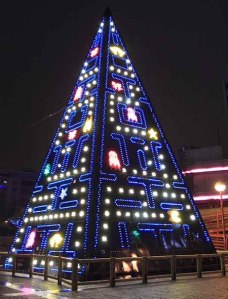 So it’s that time of year again, when beggers dawn festive hats to attempted to part you with spare change and geese get really fat and self-conscious because no one wants to eat them. Christmas is a strange time, for one it is just one day. We know this to be true, it’s the 25th of December and it never snows on this particular date (it’s a scam by the bookmakers of the UK but I have no real gripe with them). The weird thing is that Christmas last ages before and a fair bit after this date. Even me, a self-confessed Christmas miser, will celebrate old Crimbo from about the 1st of December to about the 2nd of January. Others will take it further by putting up decorations up at the beginning of November and try tell you there are only 50 more shopping days. 50 MORE SHOPPING DAYS!!! I do about five ‘shopping days’ a years so i could technically fit this into their life and death warning ten fold. I suppose the only up side to shopping this early is that you don’t have the Christmas panic goggles on. These make the most horrendously crap gift look almost acceptable and as December hurtles towards the big day the magnification on these bad boys gets stronger and stronger to the point where calender with dogs performing everyday human tasks will be a fine gift for about 75% on your list.

I suppose the main thing to do is not to panic. Its easier said than done. Every advert from the TV to the side of buses tells us that if we get the wrong gift for anyone they will instantly disown you, spitting in you face and out you as the scum of the earth when the reality is that they will just silently resent you forever. So what do we do as an intellect society? Do we make things easier for ourselves by telling each other than  it is fine and not to worry, any gift is wonderful as at least you tried? No, we started the most stressful form of festive torture that

the most depraved and evil minds amongst us could come up with. We take part in ‘secret’ Santa. ‘But Fall, this is anonymous, no one knows you buys what’. Bull shit. Sorry but everyone tells everyone as long as they liked it. Which adds the extra pressure of getting a great gift so that the other person is desperate to find out who their Santa was. If they don’t you have failed and everyone else knows you got that gift. At this point you fail and its time to find a new job as the rest of the office will pretty much disown you. So you need the perfect gift. A perfect gift so that work is bearable for the next year. A perfect gift so that you can look at yourself in the mirror. A perfect gift for that one person in the office you hardly know. A perfect gift for a stranger or be sneered at by the finance department. DO YOU SEE IT NOW? THE STRESS? AYE? Why, why, why do we think this is a good idea. Why not have everyone put in 10% of their wage, split the money evenly and everyone gets to buy themselves something they want? Just a thought!

But from this you will get the impression that I hate Christmas. No, no you couldn’t be more wrong. There are some great things at Christmas. Sitcom Christmas specials being re run every year is probably the highlight. As every year I look forward to Father Ted guiding all a troop of priests out of the largest lingerie department in Ireland and watching what Pixar rip off film the BBC can afford this year for Christmas day. I’m also looking forward to hearing the five Christmas songs that I really like being occasionally played. But my favourite Yule Time tradition, as I’m sure it’s also yours, is watching Die Hard on Christmas Eve. By far the best Christmas film ever made. I suppose a bit of time away from work to spend with family is nice as well and at the end of the day these are the people who matter and will love you even if you do get them a calendar which has a Cocker Spaniel wearing a hard hat and pointing and some metal girders.

Have fantastic Christmas everyone.
Till next time